“Cyndi Cresswell Cook’s current fans and newcomer fans alike were astonished by the first single – Lady Fuchsia, from her upcoming fourth album release – Fuchsia.  Now, hopefully all have digested the enigmatic storyboard from the amazing single, and they are about to experience the full impact of the mystic album it came from.  Fuchsia will surely bring to light the essence of the first single and continue to mystify the Cresswell-Cook audience”.

December 2, 2017 [Boston, MA] The latest album from Cyndi Cresswell Cook is comprised of ten of her best songs ever.  In the album, titled Fuchsia, Cyndi sings about her recent experiences with a psychic, Lady Fuchsia, whom she befriended at a local dance studio.  She takes it to another level in other album cuts when she reveals strange experiences which apparently leave her with certain savoir-faire in each instance.   Cyndi remains intransigent while she refuses to be swayed from her newfound beliefs.  Songs like “Here I am Here” and “Electric Blur” clearly demonstrate the bizarre timbre of this cosmogonic new record.

In this album, Cresswell Cook proves to be a rare esoteric artist whose music can sometimes comfort and terrorize both the listener’s divine and nefarious spirit at the same time.  In the CD, the avant-garde singer/songwriter’s choice for the selection of songs on Fuchsia is a compilation of guitar-laden music that hits the listener with explosive bravado like a friendly punch in the stomach.The lyrics transport the listener to another dimension, further opening their mind to the spiritual universe. 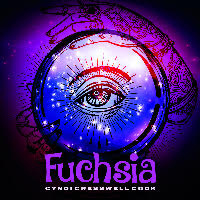 The quintessence of Fuchsia revolves around many life experiences and many out of life experiences.  Cyndi is an extremely spiritual person, and it is reflected in her writing in general, but especially on this album.  Songs on previous albums such as “Cloud” and “Gives You the Shivers” exhibit the spiritually this artist embraces.  The soul of Cresswell-Cook’s writing on this record envelops the essence of the vast metaphysical world.

It’s not so much that Cyndi is attempting to make believers out of non-believers, but the veracity of her words make it virtually impossible not to believe.

In the single, Lady Fuchsia, Cyndi was a non-believer herself at first.  Until, much to her horror, it looked like the final prediction from the psychic during her reading, was going to come true.  Quickly, she became a believer.  Fortunately, she was able to change the course of what looked like was going to happen.  She also changed the Universe according to Lady Fuchsia.

Fuchsia was recorded and produced at Keep the Edge Studios in Quincy, MA. – All vocals by Cyndi Cresswell Cook.  Other musicians include Jeri Nedoma on keyboards, Dominic Davis on bass, Keith Asack, Bruce Baritone, and Ryan Carraher on guitar, and Jon Chapman on drums.   Artistic consultant for the CD was Owen Tarnauskas.

Fuchsia is the fourth album from Cyndi Cresswell Cook in only eighteen months.  Previous albums have all done considerably well and Fuchsia looks to be no exception.  The recently released music video for the first single Lady Fuchsia has already received well over thirty-five thousand views on Youtube.  Cyndi and her crew are currently in production shooting the video for the next single from Fuchsia.  Details on the second single will be released to the press soon.  You can follow Cyndi at her official website www.cyndicc.com