“The album comes after 2 successful Releases; No Spring Chicken (2012) released independently and A Mountain, A Struggle, A Tunnel, A Light (2014) on the Nashville Independent Label Lamon Records”.

Coatesville, PA  [March 16, 2018] The new CD, Not Your Typical Day Out, from Jiggley Jones exemplifies the completely unique songwriting and vocal style that has been his consonant  trademark over many years.  As a diverse musician, it can at times be difficult to define a specific genre.  From alternative country, Americana, folk, adult contemporary, to rock, his differing musical techniques delight listeners at every juncture of the musical experience. 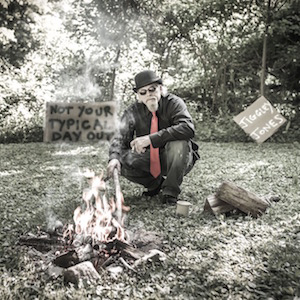 This is precisely how the title of the new release came about.  “Not Your Typical Day Out” essentially symbolizes the distinguishable sound that is undeniably Jiggley Jones; a musical niche that is Not Your Typical Day Out.  The album showcases Jones’ rare and uncommon vocal style and emotional lyrics; all of which exhibit his uncanny ability to finesse his fans and listeners into a state of chimera and reflection.  All of the songs on this album mirror the man’s personal point of view on life, human nature, and hope, from someone who has been there and done that.  Jones leaves no stone unturned with the subject matter of the ten songs on this record.

Here is an original CD that is an assortment of songs that are essentially not tied to each other lyrically or musically in any way other than displaying the highly identifiable sound of Jiggley Jones.  Each song has a meaning of its own behind it.

Danger Island done in a playful way refers to the fear that a parent has when sending their kid out into the crazy world we live in.  Wide Awake is a love song describing the feeling of an awakening based off of how exciting it can be.Vibrant is about the kids and how they can drive you crazy, but at the end of the day, you’d have it no other way.  Del Alma is a nice little love song that means “soul mate” in Spanish.That Pearl refers to each person having that one thing in life that matters the most to them no matter how different that is from the next guy.Warm is all about the importance of family.Gray is a darker song about the unavoidable realities of life and our mortality.  FlowMeet me at the waterhole. A figurative look at survival and how a thing as simple as water can bring continued life.Restless can be a somewhat confusing song about a person that has a false hope that their lover is coming back to them. Maybe they are, maybe they’re not.  And the finale on the disk – Rain – quite simply, nothing is more relaxing than a lazy, rainy day.   So as you can see, each song means something different but the musical style and vocals are all undeniably Jiggley Jones.

Previously charting on the Roots music report, New Music Weekly Internet Country Charts, and many others with previous records, Not Your Typical Day Out is destined to repeat that success and much more.  Already garnering 70,000 streams on Spotify, the record is rapidly gaining major radio and music media interest day by day.

Jiggley Jones epitomizes the spirit and talent of a true artist.  Writing, singing, and performing award-winning songs, he is here to stay.  He has already grown to be one of the most popular artists on the East Coast and beyond.  It’s only a matter of a short time until he reaches that pivotal point in his career that puts him at the very top – where he belongs.  Check out this amazing singer/songwriter at his official website www.jiggleyjones.com

His new album “Not Your Typical Day Out” can be purchased on iTunes.
https://itunes.apple.com/us/album/not-your-typical-day-out/1294051096